Americans are paying more for gas this year, and lenders are charging higher percentages for auto loans. Online, used luxury car prices are beginning to fall - which could have an impact on these websites' earnings next.

In 2019, Americans are spending more to be on the road. The cost of fueling and financing new and used cars both increased to begin the year.

This could have an impact on used auto sales - as well as the companies that facilitate these deals, including CarMax ($KMX) and Carvana ($CVNA).

On both these marketplaces, the average prices of most cars have fallen compared to prior years; our chart of Audi, via CarMax data, is just one example. In that case, the average used Audi dove from nearly $34,000 in 2015 to $27,500 this year.

Others, like Infiniti and Jaguar, are showing less drastic price declines.

If gas prices and financing costs continue to climb as they did through the first quarter of 2019, would-be buyers may try to stretch a buck driving older cars for longer. And that could hurt websites like CarMax and Carvana.

In the U.S., average gas prices are closing in on $3 per gallon as we head into the summer months - matching a four-year high for fuel costs. Website GasBuddy.com tracks the data, shown below.

The price of a car is up as well - in part led by rising interest rates, which has lenders charging more for auto loans. In November 2018, the average rate for a 60-month new auto loan hit 5.36%, the highest it has been in seven years (this data, via FRED, the economic research tool from the Federal Reserve Bank of St. Louis). 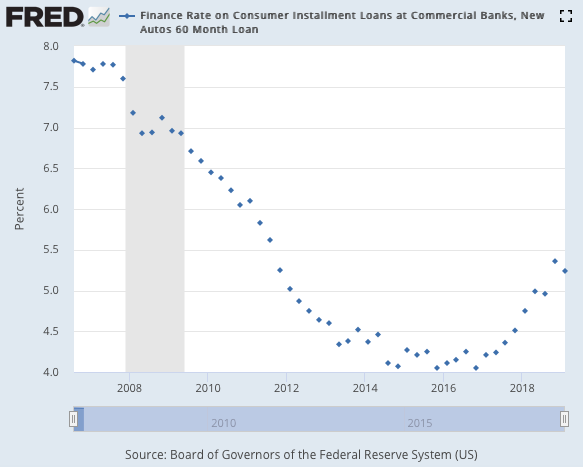 FRED also tracks the level to which used cars are financed - which hit a 10-year high of more than $18,000 this year. It appears the cost of financing used car purchases is rising similar to how borrowers are paying more to finance new car purchases.  For the past quarter, many automakers came in under analyst estimates for sales.

Carvana will announce results May 8 and CarMax is expected to report earnings for the quarter ending this month, in June.