Tesla is the most expensive used car brand as of today. Smart is the cheapest.

Think you can wait it out and grab a used Tesla for cheap? Think again.

Most frugal people know that buying a new car isn't the smartest financial move. According to Edmunds, new cars lose an average of 11% of their value the moment they leave the lot. During the first 5 years of ownership, new cars depreciate by 15%-25% every year. By the time a car is five years old, it's worth just 37% of what it cost when it was new.

We track used inventory data for major reseller CarMax ($KMX), the world's largest car reseller by volume. By taking a slice of today's (July 10, 2018) inventory, we can cost-average by car make and price to see which brands sell for the most — and least — at CarMax.

Coming in at the most-expensive used car is Tesla ($TSLA) with an average price of $64,998.00. This isn't terribly surprising, given that Tesla has only been selling its Model S since 2012, meaning that virtually all Teslas — even used ones — are still relatively new. In addition, the base price for the Model S, the only Tesla model currently available for resale at CarMax, is $74,500. They're also rare at CarMax - as of today, only four Tesla Model S's are available.

Porsche, coming in at second with an average price of $47,615.12, is known for its strong resale value. The brand has maintained a particular look, and older Porsches quickly become collectors' items when they're kept in good shape.

The rest of the top-10 used car make prices reads more like a classic list of luxury car brands, including Jaguar, Cadillac, Mercedes-Benz, and Audi. One surprise is the appearance of Genesis, Hyundai's pricey luxury sedan that commands an average price of $35,914.67. 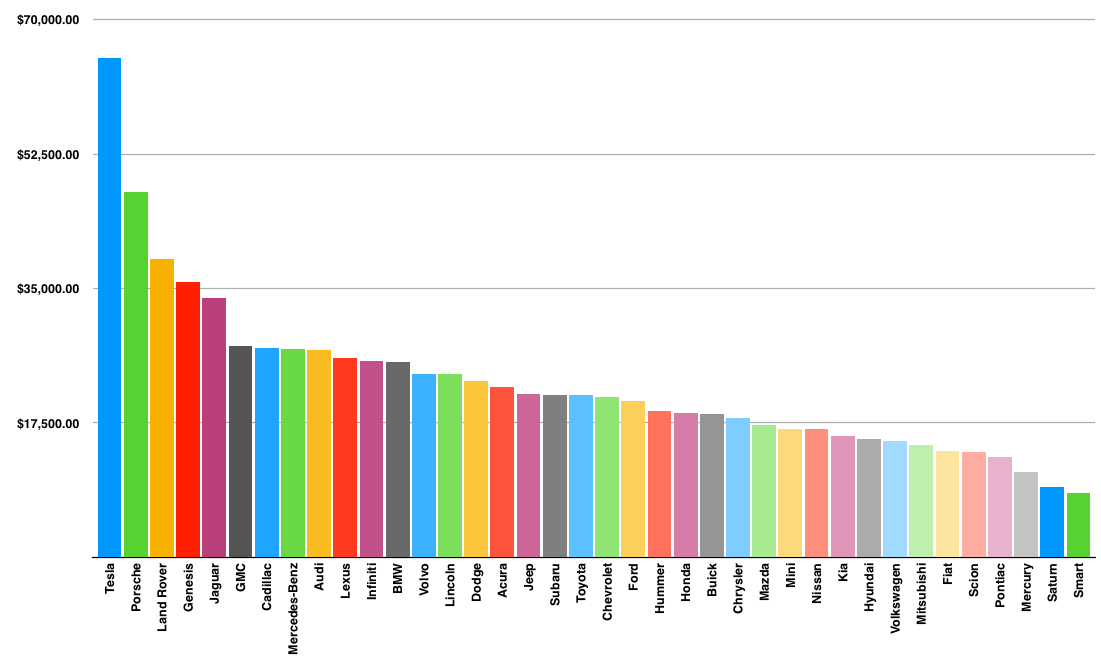 When it comes to CarMax's cheapest used-car brands, the list reads a bit like a brand graveyard.

Coming in second-cheapest make is Saturn, the now-defunct GM brand that launched in 1985 and ended production in 2009. It's no surprise, then, that it's one of the cheapest makes you can buy, given the fact that the newest model year of a Saturn would be from 2010.