Stitch Fix’s biggest seasonal growth in Facebook users, as well as a killer app and upward hiring trends, all show that the style subscription service could be fixed for a strong future.

Stitch Fix ($SFIX) bills itself as a subscription box company at the intersection of fashion and technology, sending its customers personalized outfit choices thanks to its style-selecting algorithm.

In an age where brick-and-mortar retailers, such as Sears, struggled to get people to go to their stores, Stitch Fix takes that trip to the mall and the bad dressing room lighting out of the equation. Although shares tumbled in early October after it missed sales estimates, Stitch Fix’s biggest seasonal growth in Facebook users, as well as a killer app and upward hiring trends, all show that the style subscription service could be fixed for a strong future.

When a person signs up for Stitch Fix, she (or he) is given a series of outfits to rate, as well as questions about style choices — color preferences and favorite rise on jeans, for example — and personal information, such as height, weight, and how often someone goes out in business or casual attire. This forms their style profile, which is then put through an algorithm that selects potential matches for clothes, shoes, jewelry, bags, or other accessories from over 200 brands and labels that a person might like.

This algorithm is what differentiates Stitch Fix from other online styling companies like Nordstrom’s Trunk Club ($JWN). Instead of solely relying on human preference, the algorithm sometimes picks items that the person nor their stylist would have never picked out, which allows subscribers to get out of their fashion comfort zone.

After the subscriber pays a $20 styling fee, a human stylist picks out five items a month from the algorithm and send the subscriber their “Fix”. Once that subscriber tries them on at home, they have the option to buy individual items or return them back to the company by mail.

Typical Stich Fix customers are working women who don’t have time to shop, but the service also has a Mens and Kids version. Regardless of gender, Stitch Fix users can sign up through the app via Facebook ($FB), which leaves a data trail for insight on the app’s popularity.

Last year and this year, Stitch Fix’ popularity heats up as the weather cools down. However, in recent days, the subscription service has seen a user boom.

Stitch Fix’ number of Facebook logins could be influenced by its culture; because Stitch Fix stylists can only choose items out of the algorithm, a user might not get a perfect match on everything. However, rather than sending the item back, some users go online to sell it to someone who never got that item through the service.

This is mostly done through Facebook, the social media network buy, sell, and trade groups (B/S/T for short) thrive. While not marketed and tracked by the company for obvious reasons, one such popular group has over 50,000 active members. 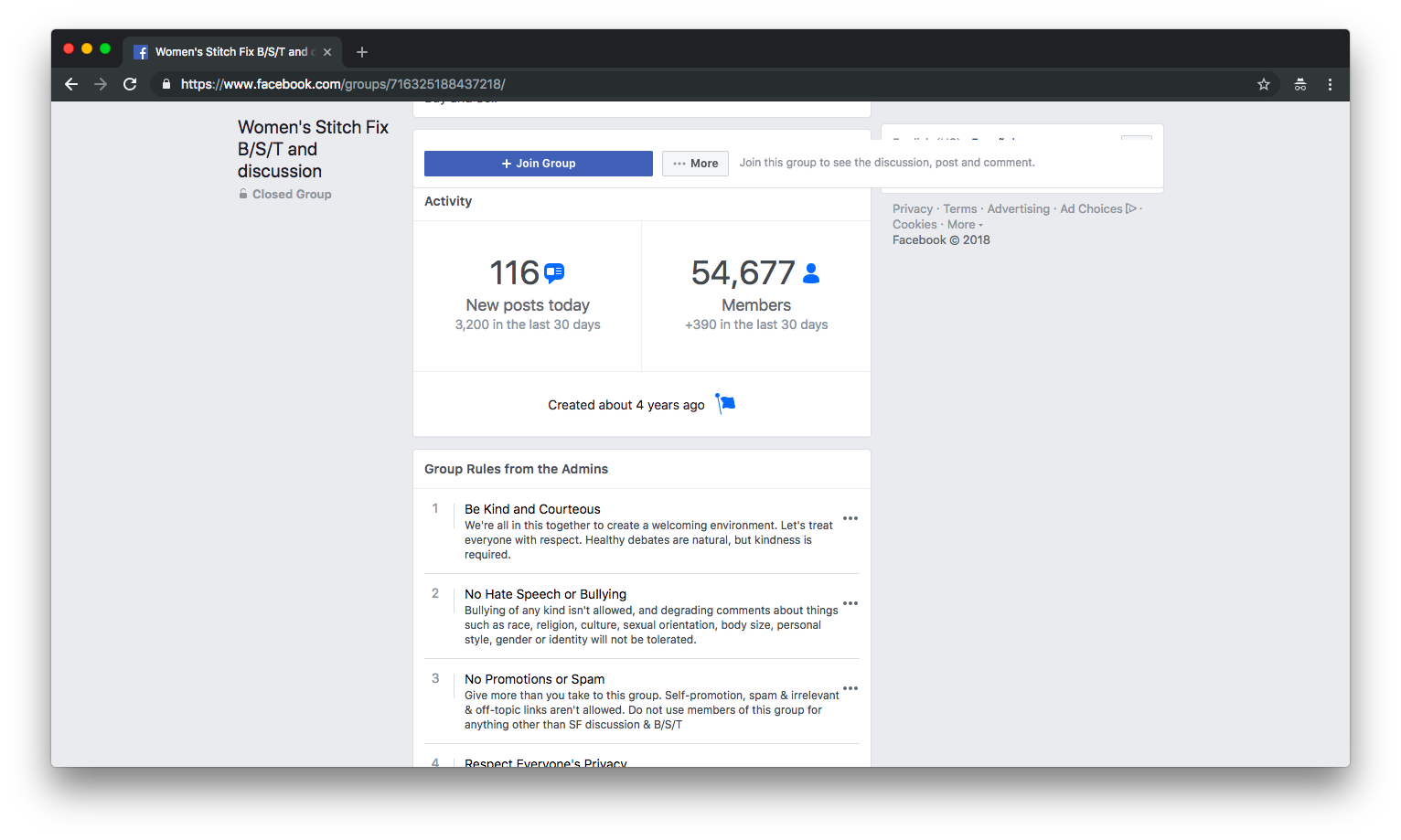 Stitch Fix also has a popular app for iOS which allows users to preview their Fix, rate the items in their Fix, and arrange for return of the items they are not buying.

The app has been rated at or above a 4.5 consistently while its review count continues to grow.

Hiring at a Glance

In terms of the company’s workforce, Stitch Fix shows healthy growth in hiring from 2016 to 2018, recently peaking in the number of job listings during the middle of October.

Specifically, the company is looking into more people to work on the core of its product: picking out items for subscribers. Jobs for stylists and for its algorithms were two categories with the most listings at the peak of its hiring surge, and were especially profound compared to its hiring patterns on the same day one and two years ago.

Algorithms control many elements of our lives, from the music we hear (Spotify) to the shows and movies we watch (Netflix) to the stories we read (Google). Stitch Fix is trying to prove that algorithms can also define a person’s style, and it is looking to improve its argument year-over-year.