These are the most-popular used cars in America

The Nissan Altima and Ford Escape top the nation's most-popular used cars according to our data via CarMax.

It's no wonder that America's best-selling used cars would somewhat reflect its best-selling new cars because, after all, new cars ultimately become used.

But that's not always true, because a) people hold onto some cars longer and b) people go after particular used cars for their perceived aftermarket value.

So it's interesting to see which cars are selling best at CarMax, America's largest used-car dealer. 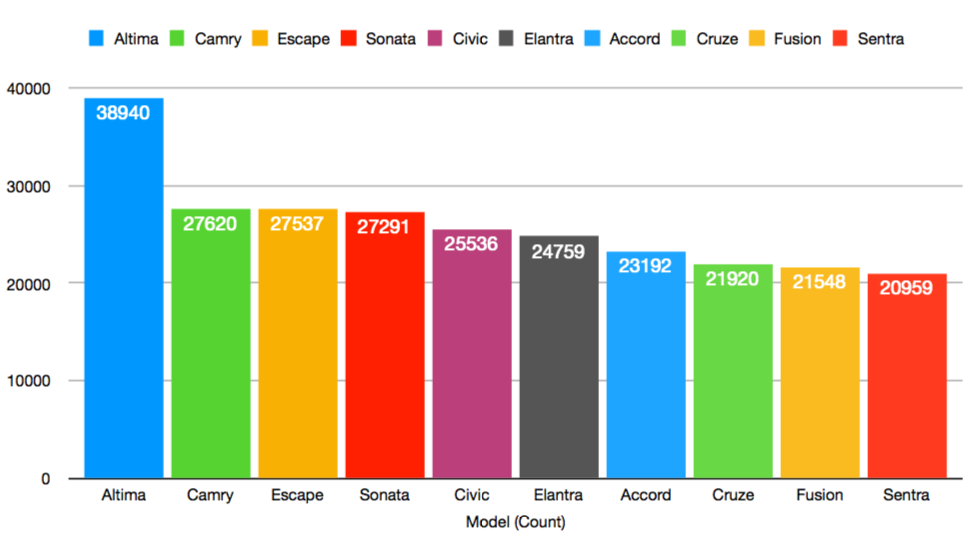 Topping the list is the Nissan Altima, with 38,940 cars sold since September 2015 (the extent of our data trail). It leads the pack by quite a bit, which is especially interesting as the Altima is not America's best-selling new car, according to USA Today. That honor goes to the Honda Civic, which, according to our CarMax data, sits at 5th place with 25,536 units sold.

This could be because people are snatching up all the Altimas they can because of perceived after-market value. Either way, it's a great seller on the used market.

What are the most popular model years of the Altima? Yes, we have that data:

(Thinknum estimates sold-car data indirectly, by filtering cars that drop off of of Carmax's public listings. Since Carmax allows 30 days for returns, we then track them for an additional month to make sure they don't get returned to the market.)