An incoming "M&A Lead" on Twitter's People Team insinuated that a new deal may be imminent.

We don't usually report on individual job listings, but occasionally something stands out in the millions of job titles we see that can foretell a shift in strategy or potential major move on the part of a company.

In this case, we're looking at a single job listing at Twitter ($TWTR) titled "M&A Lead and Program Manager, People Team" that was posted on October 7, 2019.

While the job posting is just one of more than 450 posted to Twitter's recruiting website(s) this week, it's of particular interest — or at least curiosity — because it's the first job posting with the term "M&A" in its title since 2016, begging us to ask: is Twitter gearing up for a major acquisition?

The posting is still active as of today. Previously, a "Site Reliability Engineer - M&A" was posted back in September of 2015, toward the end of a year in which the company made 8 acquisitions.

Prior to that, Twitter was on the lookout for only one other M&A-focused position, when it was on the hunt for Legal Counsel last September. 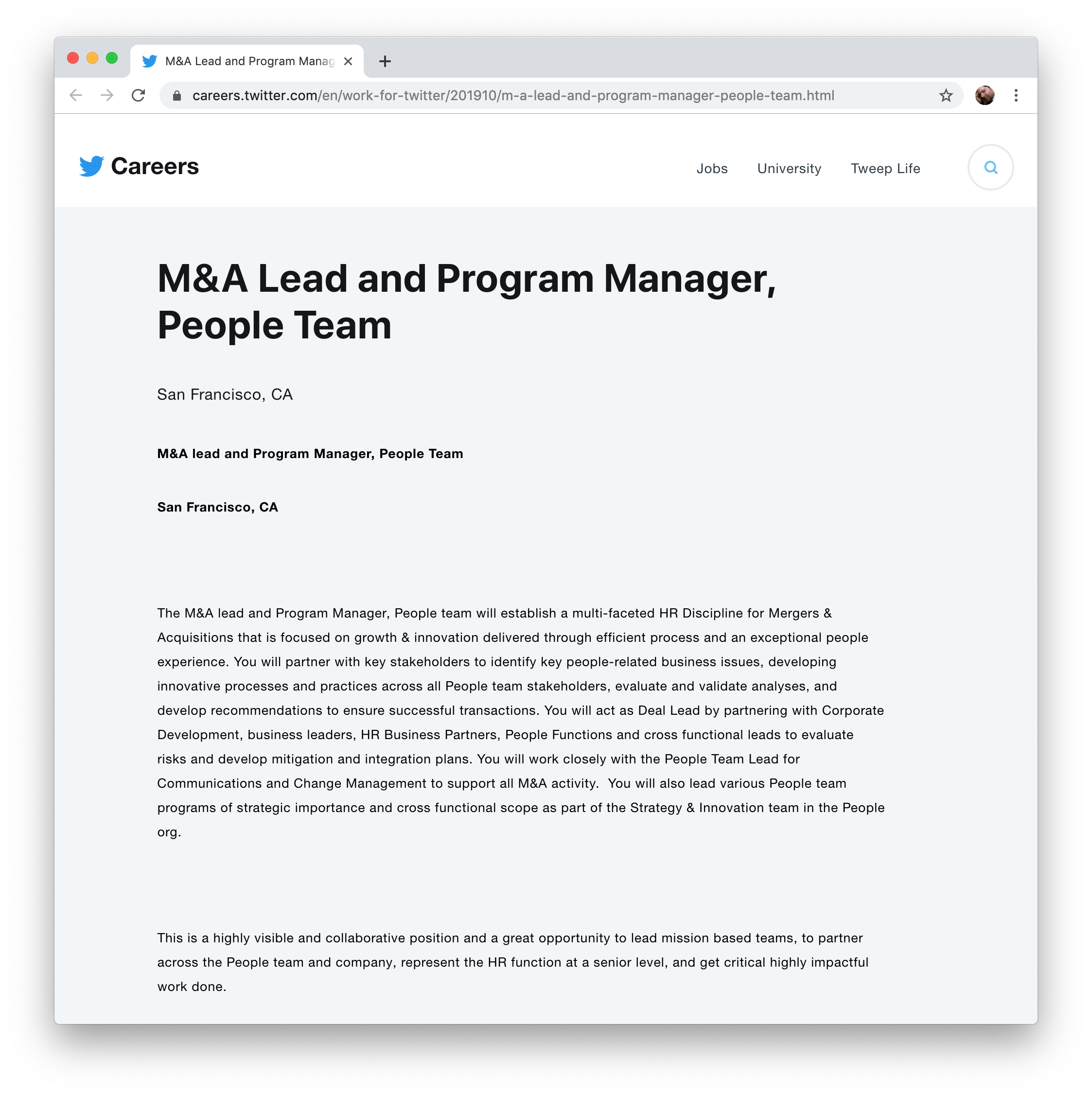 Twitter is no stranger to acquisitions. It famously acquired Vine in 2012 and, more recently, Periscope in 2015. Overall, the company has made 57 acquisitions since 2008.

But given the nature of the new hire and its placement in Twitter's "People" department, one may surmise that the company is readying for an acquisition that will require some serious talent retention and attrition strategy. Indeed, the job listing calls for "recommendations to ensure successful transactions" and to lead an effort for "Change Management to support all M&A activity". It also insinuates a new deal, with language about "project kickoff", "cultural integration" as well as evaluating and coming up with a retention strategy and associated costs. Finally, it calls for this new lead to "Quantify any potential liability that may results as a consequence of the transaction".

As for what the transaction may be, we don't know, of course. But Twitter may have shown its hand in terms of an upcoming deal here.

Another indicator here may be found in overall hiring activity at Twitter, as large M&A deals are often precipitated by hiring slowdowns. Twitter job openings have indeed slowed a bit since last summer, especially when quantified on a month-over-month basis.

Thinknum tracks companies using information they post online - jobs, social and web traffic, product sales and app ratings - and creates data sets that measure factors like hiring, revenue and foot traffic. Data sets may not be fully comprehensive (they only account for what is available on the web), but they can be used to gauge performance factors like staffing and sales.