Google Android users like Facebook a lot more than Apple iOS users do, according to ratings data

Facebook ($FB), the world's largest social network, has had a tough couple years when it comes to public perception. Once an innocent virtual space where people shared cat pictures and relationship status, Facebook is now a mega-company that, to many people's estimation, deals in personal information.

While that may bother some more than others, there's no question that Facebook's reputation has been damaged as people have come to realize how their information is used. Some call it quits, others limit their activity, and yet others take to the online reviews to make their feelings known.

As an app, Facebook has never scored terribly well in terms of reviews. That is, if you're talking about reviews on Apple's App store, where the Facebook app has an average score of just 3.2 out of 5 stars.

But when looking at reviews for the Facebook App on the Google Play store, ratings have done much better with an average score of 4.02 out of 5 stars.

As for what counts for the disparity, many things could be at play, including the ways the Facebook app uses system-level interactions such as posting pictures and videos from users' camera rolls. In most cases, negative reviews for the iOS version of Facebook are related to user interface issues, such as the one below. 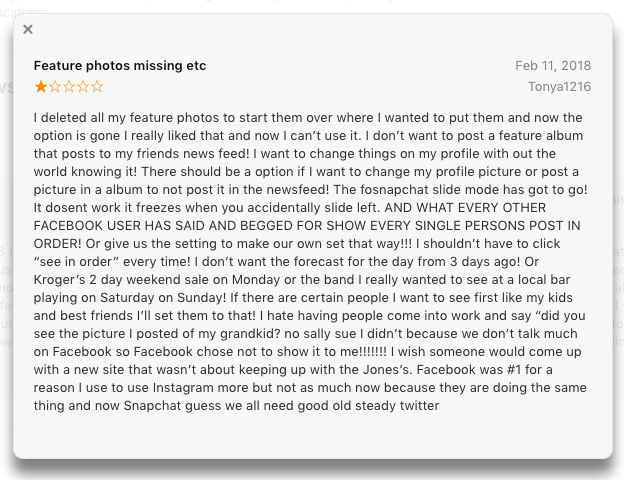 It's hard to say from where the disparity comes from, whether it's the way Apple and Google aggregate rating or if it's just that the app runs better on Android. For instance, Apple counts just 143,500 ratings for the latest version of Facebook, while Google counts over 78 million for the app in aggregate.

Either way, the difference is stark.